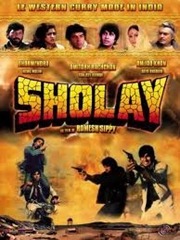 The first time I saw this film in 1985, it was already ten years old, a legend even then. What at impact it had! Sometimes, very rarely, different facets of a movie come together and magic happens because the movie becomes greater than the sum of its parts. Sholay is one such film.

Today I watched it 26 years after I saw it last.  It still had tremendous  impact. People who know my dislike of bloodshed would wonder at my statement about a film which has so much violence. Yes, I cringed in places and hid my eyes in quite a few others but in spite of that I say emphatically – if you haven’t watched it, do.

A Wild-West story Indian-style, it seems to be inspired by films such as the Magnificent Seven, except the odds are even worse, there are only two to defend the village. Yet the movie is 100% Bollywood Masala – there is a great mix of action, violence, tragedy, emotion, drama, comedy, love. Its a buddy movie, an action movie, a romance and a drama. And it has nice music too!

There are funny little cameo roles by Asrani, Jagdip and Keshto Mukherjee but its Dharm, Hema and Amitabh who provide the best comedy. Dharm is a natural, his performance in the water-tank suicide attempt scene had me in giggles. Amitabh is no less when he goes to speak on Dharm’s behalf to Hema’s aunt. Even though I am not a big Hema fan, I think she’s great here; she has a definite flair for comedy. Jaya’s performance is understated but excellent. I did not much like Sanjeev’s take of the avenging Thakur. His teeth-clenching to show anger in every other scene quite tired me. I would have a preferred a colder, more controlled performance. The supporting cast have done a commendable job.

Dharmendra and Amitabh carry the film with their contrasting styles. But I give the award to the superbly evil Amjad; he is just unbelievably good.  His eyes, his dialogue delivery, his smile – everything is as evil as can be!

There are, of course, holes in the script. Why don’t they organise better defences? Why spend so much time drinking and romancing instead of keeping lookouts? Why would Hema plan to meet Dharm  in so lonely a place when they know they are surrounded by villains? Is it still important to capture the enemy alive when one’s life is in danger? Why do they attack the enemy with so little smarts and so much emotion? And isn’t the idea of a handless Sanjeev beating up Amjad quite ridiculous? And really, does it have to be SO long? There are many whys but we shall ignore them because its still a good film.

R.D.Burman weaves his magic wand for the music with good lyrics by Anand Bakshi.