I remember this ‘uncle’ from my childhood who would always go on and on about how only K.L.Saigal was worthy of being called a singer and how Kishore Kumar and Mohammad Rafi were nothing to him. I also remember thinking what a bore this uncle was! Fearing that I will turn into a similar bore with my liking for old music, I try to keep up with the music of today. Like ‘uncle bore’, I too find much to complain about modern music but thankfully I find nuggets which I enjoy as well. Remembering a lovely melody from Swades, I decided to re-watch it today.

I am mystified as to why I don’t remember this film well from my first viewing. It was engaging and surprisingly sensible at places. Shah Rukh puts in a good performance. Being a NRI, I felt a strong sense of connection with this film.

What I liked about the film :

I’ve talked more about the film than I normally do. Let me get to the music. A.R.Rahman has done a good job and the lyrics by Javed Akhtar are very appropriate at times. The choice of placement of songs is a bit formulaic – it includes a road song, a children’s song, a religious song, a romantic song and a patriotic song!

You can listen to the whole album here. But for today, my song choice is purely for its charming melody. Enjoy! 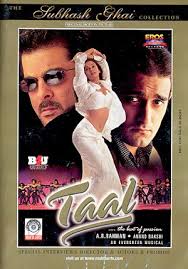 This album used to be a family favourite once upon a time. But like much of filmi music, it lost favour after a while and then got relegated to history. But it had been played often enough  for the songs to have been etched in memory. So out of curiosity to see what had attracted us to this album, I decided to listen to the music and re-watch the film as well.

The film, though not fascinating, didn’t force me into too many fast-forwards. Some miscellaneous things which caught my attention :

Except for these very salient observations, I’ll go on to the music as this blog is not about movie reviews. But you must read this very amusing review by Roger Ebert, it left me giggling !

This is thing – the music didn’t grab me. I was surprised, as both music director A.R.Rehman and lyricist Anand Bakshi won Filmfare awards for their efforts. Oh, it was good of course, but didn’t feel great.  Judge for yourself :

Here’s a link to the album.

And my choice for the day? In memory of my daughter-in-a-sheet, its Aishwarya bending in all ways in Ramta Jogi: