A Voice for the Stars

‘Oh no, he has passed away!’ I read the news item with sorrow. I know that he has been in critical care for a while. But it still hits hard. I go about my day but it is there at the back of my thoughts….this passing of a voice which has been so familiar and so dear for so long.

Browsing the internet, I see that ‘Ayiram Nilave Va‘ was one of his earliest songs. Oh! I remember the radio blaring out this song from when I was just a young girl! One doesn’t forget the songs of one’s childhood and youth, does one? I listen to his songs in the background as I read the eulogies which flood the internet. His voice is like velvet, enveloping me in a zone of comfort. What can I say that so many others have not already said? Only that I love his voice, and that I am grateful for the many gems that he has given us over the years. He may be a public figure but I grieve his loss as if it were a personal one. My respects to the great S.P.Balasubrahmanyam.

It is very difficult to choose just one song from his repertoire of more than 40,000 recorded songs. But I have chosen one, a song which appealed from the first time I heard it and still does. More importantly, it features a glimpse of SPB in a role that he has played all his life with such excellence.

Here’s a link to a totally light hearted song in which his singing prowess shines brightly as always. I hope it makes you remember him with a smile just as I do 🙂 Thank you SPB.

A very happy Pongal and Shankaranti to all my readers !! I hope you are celebrating with your families and enjoying some tasty chakkarai pongal today. For those unfamiliar with this festival, this ancient celebration marks the new harvest but also uttarayana, the northward movement of the sun. The festival is dedicated to Surya, the Sun God. It is appropriate therefore to mark the day with a recitation of Aaditya Hrudayam, the most powerful stotra dedicated to Surya.

Found in the 107th sarga of Yuddha Kanda in Valmiki Ramayana, the stotra is preached to Sri Rama by the sage Agastya. Tired mentally and physically with his war with Ravana and worried about Ravana’s Maya Shakti, Rama is adviced by sage Agastya to recite this ancient stotra three times to gain renewed energy and strength.

Aaditya Hrudayam is in other words ‘aaditasya hrudayam’ or the essence of the Sun God.  In a spiritual sense, the essence or the innate qualities of the sun such as self-luminosity (swatejas), all pervading presence (sarvavyapi), witnessing without being involved (sakshi swaroopa) reflect the qualities of Brahman or the ultimate God (Reference: paper by Dileep Bellave , 2004)

Recitation of this beautiful and powerful stotra is said to give devotees strength to face difficulties and it also illuminates the mind. Who can say no to blessings such as these?

The stotra starts with describing the setting – Lord Rama’s state of mind and an introduction by sage Agastya.
सर्वमङ्गलमाङ्गल्यं सर्वपापप्रणाशनम्। चिन्ताशोकप्रशमनम् आयुर्वर्धनमुत्तमम्॥ ५॥
This hymn is supreme and is a guarantee of complete prosperity and is the destroyer of sin, anxiety, anguish and is the bestower of longevity.

Then the qualities of the Sun God are described; these mirror the qualities of Brahman.  After this salutations are addressed to the God. The sage says तमोघ्नाय हिमघ्नाय शत्रुघ्नायामितात्मने। Salutations to the transcendental atman that dispels darkness, drives away all fear, and destroys all foes. This in essence is the power of the stotra. The last section describes the phalastuti or  ‘fruits of reciting’.

For the lyrics in Sanskrit, transliteration and translation, click here.

Listen below to S.P.Balasubramaniam’s beautiful recital of the stotra.

This film is proof that a decent film can be made with a simple concept. In essence, Roja is a love story painted on a background of terrorism. The first part describes the arranged marriage which brings the protagonists together and the small hiccups before the pair settle down. Then the movie moves on to the young man being abducted while on an assignment in Kashmir and the trauma that both people go through in quite different ways. It ends happily for those who, like me, prefer happy endings.

There are deeper questions which are addressed superficially – individual well-being vs collective interest, nationalism vs zealotry, terrorism and its cost, the ethics of prisoner exchange, child soldiers, collateral damage in war etc. All these are only touched upon with not much commentary; the director keeps his eyes focused on the protagonists.

The leads Arvind Swamy and Madhoo give good performances. The director, Mani Ratnam, retains a reasonable pace and holds our interest throughout. But for me, the films stands out for two exceptional factors, the cinematography and the music.

One cannot see the film without noticing the extraordinary camera work. The lighting is so perfect! Each shot seems to be lovingly composed. Be it the lovely lush village of the South or the snow peaked wilderness of the North, the camera has captured the beauty of all it has surveyed. I paused often, looking at a frame like I would look at a painting in a museum. Santosh Sivan is not without reason the most awarded Director of Photography in India. He is an artist extraordinaire. I am a fan.

Musically, this film is very important because it is the debut movie score of wunderkind A.R.Rahman. With two Academy Awards, two Grammy Awards, four National Awards and fifteen Filmfare Awards, to name a few, his career has been exemplary. I fell in love with the music of Roja when I first heard it in 1992; nearly 20 years later I still listen to this album with great pleasure. In fact, I believe I like this early phase of Rahman’s music more than his later work.  This score was included in the Time Magazine Top-10 Soundtracks of all time in 2005. Vairamuthu’s lyrics are a good match for the beauty of Rahman’s music. A collector’s album. Note: The songs were translated into Hindi as well but as I listen only to the Tamil version, I cannot comment on them.

You can listen to the album here.

I have selected two songs for you. Kadal Rojave is my favourite from this album.

And you must watch Rukmani for the dancing and the rhythms :

What imbues certain songs with an incredible sweetness which lingers forever in memory? What makes certain compositions much much more than the sum total of their ‘ingredients’ of notes, words and rhythm? I don’t know but Mysore Vasudevachar (1865-1961) sure did when he composed this beautiful song!

Vasudevachar belonged to the direct line of Tyagaraja’s disciples and therefore of impeccable musical lineage. His gurus were Veena Padmanabhayya of Mysore and Patnam Subramania Iyer of Tiruvaiyaru. He became the asthana vidwan of the Royal Court of Mysore.  Much later in life he joined the faculty of Kalakshetra School of Music and Dance, finally becoming its principal. He composed more than 200 compositions in Telugu and Sanskrit. A list of his compositions is available here.

Brochevarevarura is composed in Telugu in Raga Kamas (click here to read more about this raga). Like so many bhaktas before him, and so many after him, the poet begs of Rama ‘O Sita’s husband, don’t you have regard for me? Can’t you listen to my pleas? Aren’t you Vasudeva who rushed to rescue the king of elephants. Dispel my sins, hold my hand and do not let go’.  As I listen to this beautiful song, I too pray ‘Rama, I have neither beautiful words nor melody, but I plead the same; Please don’t let go of me’ !! See footnote for lyrics and translation.

Today I present an instrumental version of this song by the wonderfully talented Maestro U.Shrinivas (1969) on Mandolin.

For a vocal version, listen to this excerpt from a full concert by the Malladi brothers. I like their voice quality very much indeed.

I cannot finish this post without mentioning Brochevarevarura sung by S.P.Balasubramaniam and Vani Jayaram for the film Shankarabharanam (1979). Somayajulu as the Maestro emotes very convincingly and Manju Bhargavi shows that neither a stage nor expensive clothes and jewellery are needed to dance as our classics are meant to be danced!

As I do not speak Telugu, I have transcribed the song in Devanagari script. The translation is heavily dependent on multiple online sources.

O Rama, descendent of Raghu, who will save me other than you? O compassionate one, I cannot leave your lotus-like feet.

O Who is worshipped by the four-faced one (Brahma) etc, why are you so aloof sir? I am not competent enough to (assumed sing) your story. Please grant me a remedy quickly.

O Lord of Sita, don’ you have affection for me? O the one at whose feet stays (worships) Hanuman, cannot you hear my pleas? Aren’t you Vasudeva who saved the King of elephants?  (refers to Gajendra moksha). Cleansing me of all sins, will you not hold my hand firmly? 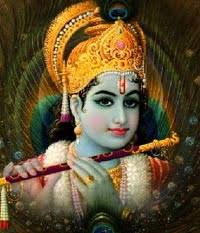 सामज वर गमन  ‘He who walks majestically like an elephant’ says Saint Tyagaraja. Like an elephant? It sounds strange in English. One hears of a leonine walk but not of an elephantine one without meaning something derogatory. Yet it seems so right in Sanskrit. A leonine walk implies leashed violence, while an elephant represents power without violence.

Saint Tyagaraja’s ishta devata (preferred God) was Rama but in this kriti  he is talking of Krishna. Written in Sanskrit, it is set to the Raga Hindolam (click here to know a bit more about this raga) and is a composition of extraordinary beauty. In a previous post, I had talked of Shiva as Nataraja, the Lord of Dance. Here Tyagaraja describes Krishna as the Lord of Music. सामनिगमज सुधामय गान विचक्षण : He who is expert in the nectar like music arising from Sama Veda, the Veda (knowledge) of Song.

Tyagaraja goes on to say यादव कुल मुरली वादन विनोद मोहनकर  , he born in the Yadava race, player of the flute, who is extraordinarily enchanting. A God who plays enchanting music, how to describe him but in enchanting music? And who else to present but a flautist?

So today’s piece of music is from N.Ramani, flautist extraordinaire. There is a alapanai (improvised exploration of the raga) followed by the composition which starts min 12:12.

For a vocal version, listen to M.D.Ramanathan below. I think that his deep voice and extremely slow rendition suits this song very well indeed.

In the simply superb Telugu movie Shankarabharanam (1979), this song is presented with the pallavi and anupallavi (first part of song) from the original by Tyagaraja and the charanams (stanzas) written for the movie in Telugu by lyricist Veturi Sundararama Murthy (1936-2010). The singers are S.Janaki and S.P.Balasubramaniam. SPB sounds divine and won the National Award for another song in the same film.  K.V.Mahadevan, the music director, also won the National Award for his work in this film.

O Lord whose princely gait is like an elephant! O Lord who protects the lotus like hearts of the pious people! O Lord whose fame transcends time!

O Lord who is expert in the nectar-like music arising from the sAma veda! O Virtuous! O Compassionate! Protect me.

O Lord who a lamp in the mountain that is music, consisting of seven notes, born of Om (mother of the head of Vedas)! O Lord who accepted to be born in the Yadava clan! O Lord who plays the flute! O Lord who amuses himself by being enchanting! O Lord worshipped by Tyagaraja!

You can find the notation here.