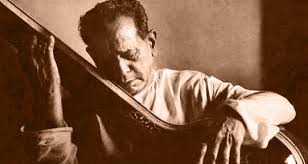 When the Great Ones of this earth pass away, one can mourn only silently. What accolades can I give to someone who has already been the reigning regent of Hindustani Classical music for decades? The quest of an Indian Classical musician is, it seems to me, to become one with the music. To realise the Hindu precept of तत् त्वम् असि (‘Tat Tvam Asi) : Thou Art That/That Thou Art. To merge oneself into one’s notes until the music and the musician become an inseparable whole. Pundit Bhimsen Joshi certainly achieved that; when he sang, HE was music. And with his passing, we have all lost something precious beyond words. Today, while I mourn our loss, I also exalt in my fortune in having his music in my life, for this music will be with me forever.

Here is a good article about his early life and his quest for a Guru.

To celebrate his life, I present the following Bhajan from his wonderful CD called Bhakti (also published as Krishna Kahiye Ram Japiye), with four wonderful songs, which has given me great listening pleasure over the last twenty odd years.

As the song says, ‘He who thinks of God all the time, is the one who will reach the Ultimate’.