A blogger’s world is rather an isolated one in general, mine is even more so. I live far away from the buzz of hotspots of Carnatic Music, listening almost exclusively to recorded music. The occasional live streaming is a treat for me. I don’t have anyone nearby who shares my interest and enthusiasm for this music; perhaps that is why I started blogging in the first place. In this isolated world, the comments left by readers of my blog always feel special. Ramesh has been my most regular commentator. He left his first comment on 20th of February, 2012. Since then, he has left me encouraging comments on almost every one of my posts, an encouragement I have been very grateful for. Though we have never met, this has been a virtual connection of more than six years. As my blog hardly ever features live events, I requested Ramesh to do a write-up of the Ramanavami concerts that he has attended during this period. Like me, Ramesh too is just an untutored rasika so his reactions and observations fit well into the theme of this blog. I hope you find his report as enjoyable as I do.

CLASSICAL MUSIC IS THRIVING IN BANGALORE 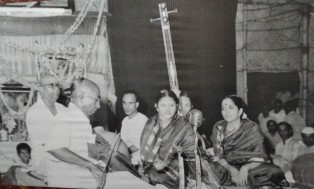 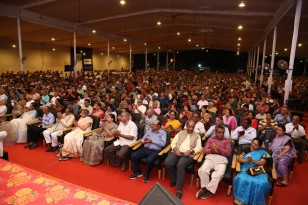 If it is Ramanavami time, then all roads lead to Bangalore, at least for those who are humming Kalyani under their breath! This is the Carnatic Music season in Bangalore, which has now become a centre second only to Chennai, for this genre of music. This year  was a resounding success, keeping up with the trend that we have been seeing over the last 5 years. Crowds are getting bigger, younger people are coming to concerts, and, heartwarmingly, people are willing to buy tickets to kutcheris. It has been truly a lovely festival of music over the last month and a half.

There are half a dozen sabhas which conduct concerts daily for a month or so.  The grand old daddy of them all is the Ramaseva Mandali at Fort High School. This is the 80th year the Mandali concerts are being held –  from humble beginnings on the footpath of  a side street to a massive pandal now at the Fort High School Grounds in Chamarajpet. Virtually every musician of note in both Carnatic and Hindustani music has performed here over the years and it is now the largest classical music event in India.

The old problems remain. Bangalore does not have a concert venue of note, other than Chowdiah Hall, which has now become unaffordable for any Sabha. Almost all kutcheris are held in pandals with the cacophony of Bangalore traffic as the sruti. The sound system at any venue is guaranteed to give trouble, as usual. Facilities are non-existent and commutes are long for any Bangalorean attending concerts. And yet, we went in droves. Season tickets at Fort High School were put up for sale online for the first time and all but the cheapest tickets were sold out even before the season started, unheard of for classical music.  Traffic police had to be deployed for the most popular kutcheris. Wow! It is heartening to see the growing interest in classical music here. Not even in Chennai do we see such crowds.

The music was mostly wonderful. Kumaresh kicked off the season in more than one Sabha, with his wife Jayanthi in one and with his brother Ganesh in another. There were many violin concerts – Ganesh/Kumaresh, L Subramaniam, Kanyakumari & Embar Kannan, Nagaraj & Manjunath, Krishnan & Vijayalakshmi reflecting the fact that talent in violin is probably at its peak now. This year the Cleveland Music Festival was being held at the same time and whoever was not going to the US came to perform here. Regulars included Yesudas, Trichur Brothers, Kadri Gopalnath, Ranjani & Gayathri, Priya Sisters, U Rajesh, Shashank, Malladi Brothers, TM Krishna, Soumya, et all. Hindustani music stalwarts Ronu Majumdar, Vishwa Mohan Bhatt and  Pravin Godkhindi were also here. This is largely a Carnatic music festival, but there is also a smattering of Hindustani music.

This year seemed to be the season of Todi. After listening to it for 6 times over 20 days, I am willing to give it a break for few years! Surprisingly Kalyani, Bhairavi, Abheri and Sankarabaranam were rare. There were multiple Dharmavatis, which competed with Todi for the title of the Raga of the season. Thankfully the very obscure ragas were hardly to be heard,  reversing a trend from the last few years where we have heard ragas with unpronounceable names. The Ragam Thanam Pallavi continued to rule, much to my chagrin (Edit: Ramesh has a quite ununderstandable revulsion for RTPs!!). Freed from the shackles of a time bound 2.5 hour concert in Chennai, artistes let loose with elaborate RTPs, often starting at 9.00 PM !

Two concerts stood out for me and they will live long in memory. Trichur Brothers in Basaveshwara Nagar Sabha were at their absolute best.  A short 2 hour and a bit concert featuring Sahana, Hamsadhwani, Reetigowlam, Pantuvarali, Kaapi, Sarasangi, Kaanada and Kurinji  was mesmerising. They sang their main piece in Pantuvarali early on in the concert and after the thani avarthanam played a scintillating series of thukkadas to round-up the concert. The concert was such a brilliant one that even after the Mangalam, people were hesitant to leave.

The other was a majestic concert by Ranjani & Gayathri at Fort High School. The 3000 capacity pandal was full and people were standing in the aisles – such is their popularity here. And they delivered an absolutely divine RTP in Nalinakanthi. A complicated Pallavi and a thala structure, beautifully supported by the accompanying artistes was easily a classic for the ages. There were 1000 people at Mangalam time  at 10.00 PM; I have never seen anything like this in any kutcheri ever.

In keeping with this blog’s style I will feature a krithi which perhaps symbolizes this year’s season simply because it was the most sung krithi, 3 times no less ! Todi it has to be and it is Shyama Sastri’s swarajati masterpiece Raave Himagiri Kumari.

The featured renditions of the Swarajathi that I have chosen are both for sentimental reasons. The vocal rendition is from the Bombay Sisters, C Saroja and C Lalitha who were awarded this years SV Narayanaswami Rao Award.

The Instrumental rendition I have chose is by Mandolin Srinivas, the legend who was a star performer at every Bangalore season for many years, and who often did not accept a fee from the sabha just to support them. His concerts always attracted huge crowds in Bangalore and every time Rajesh now performs , it is hard not to miss the prodigy.

(Edit : For Lyrics and Translation, please refer to my previous post on this composition Rave Himagiri )