“This is Fatehpur Sikri. Emperor Akbar established it. There is strange attraction in its emptiness and silence. A kind of magic. That is why I am drawn to come here again and again. And even then I remain unsatiated.” 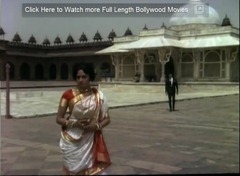 impeccable voice. How could I not like this film? I feel exactly the same way! Here’s the Durgah of Salim Chisti where I heard the most beautiful music many many years ago.

The protagonist is Prince Gyanshankar, a man tortured by what he considers to be his inherited ‘bad blood’ – there is madness in the family. He lives a controlled life to keep a reign on himself. His character is briskly established at the start of the film and though I did cringe at the tiger hunt, it added to describing him as a man.

He rescues a young and beautiful widowed woman from bandits and then from her in-laws who ill-treat her. He establishes her as his concubine in his palace, going so far as to give her the jewellery his mother had left for his future wife. He says ‘तुम्हे इन गहनों पे पूरा अधिकार है’ – you have full rights over this jewellery. It sounds like a defining moment in their relationship. He gives her a new name to cement their relationship – does that symbolise a cut-off from her previous life? Saudamini is dead and Madhuri comes to life.

Hema is gorgeous once she sheds her window’s whites. Gyanshankar seems to have Pygmalion like intentions, trying to change an illiterate and uncultured woman to be a suitable partner for a Nawab. But Madhuri is no Eliza.  Her English teacher says ‘Rani sahiba is rather dull-headed’. Though she cleans up well and learns to read, she falls short of his needs in a companion.

Ten years pass. When he realises it, he is shocked. But why? Was this not the life he chose? In spite of his apparent acceptance of his ‘tainted blood’, he must have had some expectations of his life which did not come to pass.

He chances upon a

young and lovely singer and as before, he selects another woman to adorn his life without really getting to know her. Its consistent with his character but not normal for a prince who is marrying ‘to do his duty’, as he puts it. In effect, he buys her from a drunkard father with gambling problems. History repeats itself; once more he picks a beauty in a helpless situation. Does he have a need to be needed, to be looked up to ? Does he not feel equal to women of his own social level? What happens when the concubine and his wife have to share his favours?

Well, you’ll have to see the film to answer that! I have to warn you that the climax is a bit of nonsense, totally illogical. Script-writers seem to like mad characters so as to get away with anything, but it doesn’t work. However the strength of the first half carries the film. Raaj Kumar gives a controlled performance and Rakhee does reasonably well. Hema Malini has lost an opportunity to shine as her role is strong, but she doesn’t impress. Her interview  here seems to be a bit of an excuse. Vinod Mehra provides very decent support.

Shankar-Jaikishen have given a solid album with some very good music here.

You can listen to the full album here.

My selection for the day is Re Man Sur Main Ga. The movie has used only one stanza, so listen to the audio version below.

And as a fan of Kishore, I cannot help but feature this song as well! You can admire the pretty ladies too!

I do like historical / mythological films! I don’t see many of them; I am too squeamish to see the likes of Troy or the Gladiator. So when I get to see a historical without too much blood and gore, I am mighty pleased! Anyway, a nicely tied dhoti and lots of man-bling is nicer to look at than short skirts on men, don’t you agree?

The story is based on records from both Buddhist and Jain literature. The makers have used cinematic license and the story as presented differs from recorded versions. The film is about  Ajatashatru, the king of Magadh around 500BC, who falls in love with Amrapali, the royal courtesan and dancer in Vaishali, an enemy state. Interestingly, its ending is anything but typical Bollywood. Perhaps that’s why the movie didn’t fare well?

Sunil Dutt as the blood-thirsty warmonger is reasonably good. Though he has the physique to pass off as a soldier, there is something intrinsically soft about his face which makes me question his suitability.  Vyjayanthilamala, on the other hand, is perfect as the courtesan. Not just the beauty and the dancing skills, but something lush about her makes her look just the part. There are some supporting characters who too aren’t very convincing.  On the whole, though, the movie is entertaining.

The music by Shankar-Jaikishen is memorable. There are only four songs, all sung by Lata but what lovely songs! Neele Gagan is penned by Hasrat Jaipuri, the rest by Shailendra.

Neele Gagan has Vyjayanthi dancing so that’s my choice for the day : 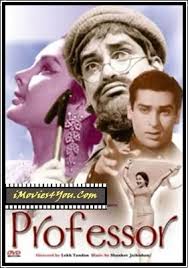