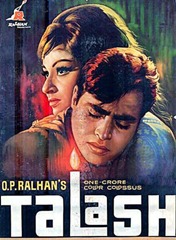 Help! Something is seriously wrong with me! My brain has been gobbled up by aliens! I watched Talash last week and although the movie stars Rajendra Kumar for whom I cannot find one complimentary adjective, although the comedy track, which is not in the least comic, seems to have more screen time than the main story, although the story stretched my credulity to its limits, I was riveted by it! I need Help (capital intended)!

Demand On Credulity(DOC) 1: So there is this young man Raju, just out of college, played by Rajendra Kumar who is all of 40 years old in real life! DOC2: His bosom pal and class mate is played by O.P.Ralhan, who is only a few years older at 45! Raju’s stated ambition in life is not just to be rich, but super rich. He takes up a clerical job in Ranjit Rai’s (Balraj Sahni) business and after some hiccups, impresses his boss.

DOC3: On a holiday in…now where was this? I’ve lost my notes..let’s call it a hill station, he is mistaken for a prince. And from where does he get his princely garments pray? This prince thread is quite superfluous to the story, just an add-on to enhance sex-appeal of a star with very little sex-appeal. He meets a village girl Gauri (Sharmila Tagore, who is a nubile young this and an age appropriate 23 years old in real life) with whom he falls in love and thankfully for us, sings some nice songs with. He promises to come back on a particular festival day and marry her. She says if he doesn’t come she will kill herself.  Any sensible person would have been put off  by this statement, googling ‘self destructive psychosis’ to find out what’s wrong with her and how fast he can run away from her, but not our hero. Sounds risky then to leave it until the last day then, wouldn’t you think? And yet, DOC4: we will see that the hero will make no allowances  for transport issues, bad weather, villains and such but leave it all until the very last moment!!

Back at work, he gets invited to a party at his Boss’s home to celebrate the return of his only daughter, Madhu, from abroad. Sharmila and her dimple look delightful in spite of weird hairdos. DOC5: Though she is a dead ringer for Gauri, Raju though confused does not recognize her! But of course, she is none but Gauri. To test his love, she sends out lures (tut-tut!) and is upset when he succumbs finally. Surely this is entrapment? DOC6: Worse still, she gets her father to offer unbelievable amounts of money to lure him to marry Madhu and poor Balraj Sahni has to use his not-to-be-sniffed-at histrionic skills for a most inappropriate action. The ending is obvious enough. DOC7: When Raju realises what Gauri/Madhu has been about, he laughs aloud instead of strangling her!!

O.P.Ralhan, who is both the writer and director of the film, gives himself a most undeserved, meaty role as the sidekick. This secondary plot has more drama than even the main one! Helen has a nice role and the supporting cast do a decent enough job.

Now that I have revealed all, you would think that I sat through it with a supercilious air, sniffing my nose at the odd goings on. Not so. I was riveted to the screen and at times even abandoned my ironing so I could pay better attention to the dialogue!! I have no explanation. It must be the brain-slurping aliens. That’s what it is. And the music by S.D.Burman with lyrics by Majrooh Sultanpuri. You will notice that I have given a big smile to all songs except one! Here are the tracks:

My choice for the day is the title song by Manna Dey.

And to admire Asha’s expertise in this genre and Helen’s shaking of her tail feathers, here is Kar Le Pyar by Asha Bhonsle.