I admit I am amazed! This film was a super hit? Whatever were audiences thinking of? Granted, the music is excellent. But if an insipid film like this with a lacklustre script, unlikeable characters and pedestrian performances became a hit, I can only shake my head in disbelief!

Like all masala films of the ‘60s, this Nasir Hussain film gives low importance to the very predictable script. But normally there are at least some characters one likes in masala films but not in this one. Here are the players – would you like them?

The Mother (Veena): After a marital separation, Mohan’s mother  abducts her son (!) and brings him up on her own in Kashmir. Even when the opportunity arises when he is a grown boy, she denies him the right (!) to make himself known to his father.

The Father (Krishan Dhawan): After losing his wife and son, he brings up the orphaned daughter of a friend. He arranges her marriage sight-unseen (!)  with an idiotic young man and is not deterred even on seeing his antics !! And this is the daughter he loves! He is also arrogant. When he is fooled into thinking that he has found his long lost son, he manipulates / emotionally blackmails (!) his daughter into agreeing to marry him – even though the said son is unstable and suicidal! All for what? ‘Mera Khoon’ which, let’s admit, is not looking that good now!

The Hero (Joy Mukherjee) : On discovering his father’s foster daughter’s engagement, he sets to breaking it up (with no facts other than a newspaper article) by romancing the heroine with lies (!). Joy Mukherjee has the acting ability and the personality of a well-kneeded lump of dough – actually the dough may come out looking better! When found out, he still doesn’t come clean with the lady, resorting to stalking (!) (a BAD thing, you young men out there). And she still falls for him!!

The Heroine (Asha Parekh) : When she is forced into an engagement with an idiotic young man, she joins her friend in playing very unkind pranks on him. Other than that, she is quite spineless (!), has questionable taste (she falls for Joy!) and gives in to dumping him for her foster father’s pretend-imbecilic son. She is much too often seen in pants, which doesn’t suit her one bit. She looks quite lovely in a plain white Salwar Kameez in a dance practice scene.

The Comedy Track (Rajendranath) : The comedy track is much too long and very very unkind. Not to my taste.

The Villain (Pran) : Normally an excellent actor, he disappoints in this film. His portrayal of a depressive and suicidal young man is accompanied by constant nail-biting and shifty eyes – makes him look like an imbecile!

When you hear the music though, you’ll know why this film was a hit. A wonderful album by O.P.Nayyar with lyrics by Majrooh Sultanpuri, it has a number of lovely songs.

My choice for today is Lakhon Hai Nigah Mein to listen to Rafi at his peak. 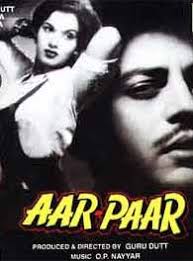