Album : My Name is Khan

So here it is at last, my favourite song from 2010! Some songs are made wonderful by the lyrics, some others by a beautiful voice. In my opinion this song is a composer’s triumph;  all credit goes to Shankar, Ehsaan and Loy for orchestrating this lovely piece of music.  The different elements – the male voice, the female voice, the instruments, the rhythmic clapping – they all come together in a glorious concoction. I especially like the female voice used in the lower register and the male voice in the upper register.

In the movie, the song is used as a background score and at times one gets distracted by the dialogues, which is a pity. Surely this song deserved the full attention of it listeners? Still, one can admire how very well Kajol ‘speaks’ with her eyes and face..what a fine actress!! And Shah Rukh Khan, when he receives that complimentary look from Kajol, expresses his mix of embarrassment and happiness in a beautiful half smile. Well done, both of them!

So here is the clip from the film. Enjoy!

A Song for Kajol’s Effervescence 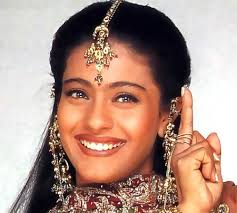 In the Bollywood world, music and films go hand in hand. Songs are very strongly associated with the actors on whom they are picturised. As far as the music is concerned, the actors may only lip-sync and dance to the beat but they can and sometimes do add meaning to the music by the way they emote on screen. Singers like Kishore Kumar would bring aspects of the actor into their music such that it sounds as if the actor is really singing. I don’t believe that is the case in today’s music. However, the bonds between popular music and the actors are still a very strong.

On that theme, I am starting a sequence of posts to present music which best represent the personality of actors or actresses for whom it is written.

Who can see a movie of Kajol and not remark on her effervescent personality? An accomplished and successful actress, she has played part young-and-giddy and part serious roles in films such as Kuch Kuch Hota Hai and Kabhie Khushi Kabhi Gham. In the more recent My Name is Khan, her normally ebullient personality is a bit more subdued but still, one can see her liveliness bubbling under the surface.

In searching for a song to best represent her, I unerringly descended on this…yes, a Tamil song! Why? Because I have never forgotten this song not only because the music is good, but also because the atmosphere on the screen is joyous.  And because Kajol bubbles like champagne. And because language doesn’t matter if the mood is right.

And don’t forget to note Prabhu Deva’s great dancing…oh, how the man can dance!!!

For those who prefer the Hindi versions, you can listen to the whole album here. I must say that I like A.R.Rahman’s older albums much better than the recent ones. This is indeed an excellent album. The Hindi version of this song is called Awara Bhanwre. Enjoy !!