Who can resist a comeback film? Here was an actress who made only one super-hit picture when she was 16 and was coming back after 12 years to the industry,  having been married, a mother of two children and divorced in this span of time. There was so much hype surrounding this reappearance that we were all impatiently awaiting its release. (Edit: My thanks to my friend who has pointed out that Saagar was not the comeback film, there were a couple of films in 1984 that Dimple acted in. But I have no recollection of them, nor, I think, do the general movie-watchers in India. Saagar remains the comeback in my mind).

The film did not disappoint. At 28, she looked more beautiful than she did at 16 and her life experiences made her a better actress. The male leads, Kamal Haasan and Rishi Kapoor, were both convincing in their roles. Dimple and Kamal Haasan went on to win Filmfare awards for their performance.  There were some good performances by supporting actors too,  Nadira, Hangal and Saeed Jaffrey in particular.

I was pleased to see that Sippy Films (the producers) now have a Youtube channel and have uploaded a number of their films. I settled down to re-watch the film after more than 25 years. Love triangles in films always makes me take sides (not necessarily at sync with the story!). Did you see Its Complicated and thought at the end ‘yeah Meryl, the better choice but he is so BORING!’? I did. Now here are three talented actors, all of whom I like individually. Who is going to make me take their side, I wondered..

But as to taking sides, I found it difficult. Kamaal has some good dialogues : इनसान बनना सब के नसीब नहीं होता, कुछ लोगों को देवता बनना पड़ता है  and यह प्यार नाकाम हुआ है, ख़त्म नहीं  . Wah Wah Akhtar sahib!!  But I hate how in Indian films with a love triangle, the guys try to ‘give’ the girl to each other as if she were a thing and her choice didn’t count. And anyway there was so much melodrama towards the end that I was annoyed with the lot of them and didn’t much care who got the girl!!

The music by R.D.Burman was good and the lyrics by Javed Akhtar was very nice in places.

If you want to hear the whole album, click here.

My pick of the day is Saagar Kinare sung quite beautifully by Kishore and Lata. Enjoy! 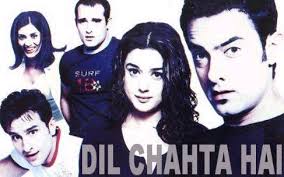 I was in grade 8 then. It was art class. As usual, most of the class was not serious about my very favourite subject but I was paying attention to my work and enjoying myself nonetheless. Then I overheard the boys in the next table discussing Bobby, talking about Dimple in her bikini scene, considered bold at that time. Their comments got more and more salacious. Like a ‘good girl’ I behaved as if I heard nothing;  that’s how I had been taught to behave. But inside I was upset and bewildered. I must say that I was very protected at home and quite young for my years. I didn’t know the term ‘objectification of women’ then. Even if I had known it, I would not have had the guts to turn and confront the boys.

That day left a mark in me. It was a growing up of sorts and not in a good way. Was this how all boys viewed girls? I was repulsed and became very wary of boys in general, never viewing them as friends but as some kind of danger. It got reinforced many times after that, the worst being when I went to university and had to put up with the treatment men gave young girls in crowded Delhi buses. It would be called molestation anywhere else in the world, in India it went by the misnomer ‘eve-teasing’ as if it were something to smile about. How did we come out of it without being psychologically crippled,  I don’t know. Or maybe I am psychologically crippled, who knows!

Perhaps it was that memory which made me encourage my artistic teenaged son to join  drawing classes with nude models. In answer to those teenaged boys all those years ago in one drawing class, my boy learnt to look at the female form with respect and with an artist’s eye in another drawing class.

But I digress. Bobby was just the same-ol’-same-ol’ love story – two youngsters in love against parental opposition. Shakespeare succeeded with Romeo & Juliet on that plot, so have many many other authors.   Bobby was not a tragedy; the kids get their way. And we youngsters loved it. Especially because very unusually for Indian cinema of that time, the lead characters were actually teenagers. Rishi Kapoor & Dimple Kapadia were both natural actors and did justice to their debut film. We could actually identify with them. The movie succeeded also on the strength of its excellent music. Laxmikant-Pyarelal’s music was young, fresh and very catchy. You can listen to the album here.

I was going to pick Jhoot Bole for the nice dance but my heart wasn’t in it – Bulleh Shah’s words pull my heartstrings as does Chanchal’s singing, so here is Beshak Masjid Mandir Todo. 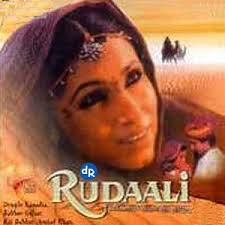 Rudaali is the story of a professional mourner. When I think of this film, I remember the beauty of Dimple Kapadia, the wonder of Rajasthan’s landscape but above all I remember the music of Bhupen Hazarika. A movie about laments and lamenters  needed to have soulful, mournful sounds which melt the heart and fill one’s eyes.  Bhupen Hazarika does a commendable job, especially with the song I have chosen to present today.  The power of the film was such that nearly 18 years after seeing it, the interwoven images and music still linger in my mind, leaving a gentle sorrow for a woman who was but a fiction of someone’s imagination. A good film with good music.

Gulzar’s lyrics are impeccable as always. How I envy a poet his power over words!! Bhupen Hazarika (born 1926) is of Assamese origins and brings an Eastern Indian touch to the music which has a Rajasthani flavour as well. He did not compose for many Hindi films and Rudaali was his most successful work in Bollywood. I am unfortunately not familiar with his Assamese work but I have a CD of his singing Bengali music which I enjoy.

Here are the songs from this album, and a link to it in MusicIndiaOnline. I think Lata’s voice quality is not at its best, but still, she is Lata and she delivers.

To honour the composer, I am presenting below a song sung by him: