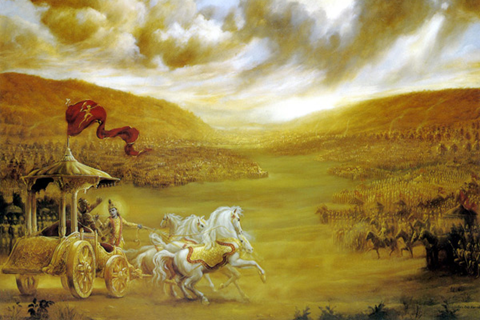 I was seven or eight when I first heard of the Bhagavat Gita. My mother registered my sister and me into Chinamaya Mission’s program for young ones. Chanting the Gita was one of the activities. I even learnt the whole of chapter 7 by heart for a competition, and what’s more, I won a prize for it too!

Not that I understood anything much at that time. Subsequently I have read some summaries and heard some lectures but have not really delved into the Gita. I would tell myself ‘I really should read it at least once from end to end’  but I never got around to it. Well, last week I finally embarked on my long time goal. I hope to have the two-fold benefit of understanding the basic ideas of the Gita and improving my Sanskrit at the same time. I am not going to rush through it, after all, what is the hurry?

Why am I telling you all this? Well, if you see me quote from the Gita every now and then, don’t take me for some erudite vidushi! I am just stumbling along my first word-for-word read of the Gita and no doubt it will filter down into this blog as well.

For those who do not have the time to read it, here is the gist of Chapter 1 which I have just finished. Sanjaya, the charioteer and seer for Dhritarashtra is our narrator. Dhritarashtra asks in the first verse of his seer, ‘What’s up in the battleground ?’. Or rather, he says elegantly in Sanskrit

What did Pandu’s son and my sons do when they assembled on the sacred (Dharmic) plain of Kurukshetra, eager for battle, O Sanjaya?

Note how he refers to the battleground as धर्म क्षेत्र  or the field of Dharma, a word which encompasses so much from righteousness, duty, religion, virtue, justice, morality, propriety to law. That is the field for which the Gita was written.

The theme of this chapter is Arjuna’s grief. Those who know the Mahabharata know that the Pandavas had come upon this point after many years of injustice, treachery, insults and even murder attempts. They had not lightly decided on this course of war with their kin. Yet when Arjuna sees his grandfather, uncles, gurus, sons, grandsons, in-laws, cousins and friends arrayed before him on either side of the battlefield, he is overcome with the magnitude of what is happening. ‘What am I doing it all for?’, he seems to ask Krishna, his charioteer, in this verse.

He is a shaken man. His limbs tremble, his skin feels as if it burns, his mouth is dry. We can hardly recognize the great and experienced warrior that he was in these descriptions. His main fear seems to be that of accumulating the great sin of destroying his family.

Alas! We have resolved to commit a great sin, inasmuch as we are endeavouring to slay our kinsmen out of craving for the pleasures of dominion.

It seems to me that he was more worried about gathering sins than the loss of dear ones. Whatever it was, I feel most sympathetic with him and wonder how the story would have gone if he had walked away from the battlefield then?

There are some verses (40-48) which I found rather objectionable in this chapter. His idea of a adharmic future is the impiety of women (not men!), the intermingling of castes due to which all the forefathers will go to hell without offerings of pinda and water! I suppose it struck at me personally as a woman who not only married outside her caste but also outside her region. To be accused of impiety and the ‘sin of intermingling of castes’ seems rather harsh! What can be wrong about the intermingled origins of my two wonderful children? Two such intelligent and empathetic citizens of the world, both doctors who aid people everyday, surely the Gita does not question the propriety of their existence? Ah well, different times, different mores. I am not one to take the scriptures too literally…

The theme song of the day? What came to mind immediately was ‘Sthirata Nahi Nahi Re’ by Sadasiva Brahmendra. ‘There is no stability of mind’ says the poet. ‘We are engrossed in this ocean of three kinds of sorrow, caged by arrogance and egotism’ he says. Arjuna too felt deep sorrow at his situation, a situation which came about partly by arrogance and egotism as well. ‘Minds wrapped up with the bond of things, perplexed by wrong or contrary knowledge’.  Interesting that vishaya can be interpreted as objects but also as country or land. Is that not what the Pandaves were, bound to their desire for land? For lyrics and translation, see footnote.

The song was made his own by the incomparable Maestro Balamuralikrishna. I believe it was set to music by him for the film Dharma Nirnayam but I cannot confirm this.  It is set to Raga Amrutavarshini here but this poem has been sung in different ragas by different artists. To know more about this raga, click here.

We are engrossed in this ocean of three kinds of sorrow (note: Adidaivika (Divine), Adhibhoutika (of the body) and Adhyatmika (of the soul)), caged by arrogance and egotism.

Minds wrapped up with the bond of things, perplexed by wrong or contrary knowledge.

Opposed to union with ascetics, their achieving of joy is very uncertain.