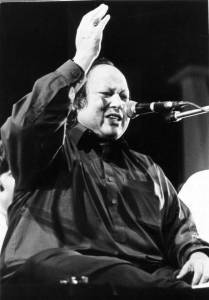 This is a post I have been meaning to do for a long time so I am happy to have finally come to it. Regular readers know that though I write mostly about Carnatic Music, I am very fond of a few other forms as well. Qawwalis are near the top of my list. There is something about the passionate singing, the clapping rhythm and the beautiful poetry which appeals very much to me. My choice today is a Qawwali written by Fana Buland Shehri, tuned and sung by Ustad Nusrat Fateh Ali Khan originally in the late 1980’s.  There is also a recent ‘filmi‘ version but I have not heard it.

Devotion comes in many guises, doesn’t it. There is the cerebral kind, the followers of which are very interested in philosophy and meaning. They tend to think of mythologies as analogies and scriptures as setting direction rather than dictating rules. Many of them are loners in their devotion, internalising their beliefs and preferring to go their own way rather than follow any organised groups. I confess that my devotion belongs in this category.

There is ritualistic devotion, the followers of which find great solace in performing religious dictates to perfection. They will fast on the days one is meant to fast, make a study of ‘puja vidhi‘ or its equivalent in different religious practices, visit places of worship as ordained and generally see the perfection of their rituals as proof of their devotion. These people enjoy devotion in a community; at times allowing the lines between social and religious interaction to blur. The cerebral kinds look as these ritualists with benign bemusement but are happy to join in occasionally.

Then there is passionate devotion, the followers of which seem to have an almost intimate association with the Divine. Not for them the rules and rituals of established religion, nor the studious examination of philosophy.   Sometimes they are in a community, at other times they weave a lone path. The ritualists abhor them for they follow no rules, the cerebralists look askance for they seem to have no thought of consequences. They seem to just Love God, and I do mean to capitalise the L as it seems apart from all that I call love. But ah, to love like that!  If one of my young lady friends from a good family suddenly declares that she will abandon everything, and take to the streets singing and dancing in praise of God, I’ll probably call their family and offer a referral to a good psychiatrist. But this is what Meera did and we still sing her songs! What does it take to have passionate devotion like that? Qawwalis are songs of such passionate devotion, and they quite intrigue me.

Coming to my song choice of today, I have given the lyrics with transliteration and translation as I always do. Sufi songs always seem to have a meaning within a meaning so I have also given my personal interpretation. I’m no expert; I know little of Islam, even less of Sufi beliefs. I understand only the parts of Urdu which are common to Hindi. Using dictionaries and other resources online, I present you with a ‘good enough’ translation in order to enjoy the music – or so I hope!

Of note : The poet gives the Divine a feminine persona, taking up a masculine one for himself. This is interesting in itself. In Hindu devotional poetry, though there is plenty of poetry addressed to Goddesses, the Divine principle or ‘Purusha‘ is masculine. Male poets at times take on a female persona or ‘Nayika Bhava‘ but I wonder if male divinities are given a female persona in poetry? As I write this, I can only think of the ‘Kannamma‘ songs of Subramaniya Bharati, where Krishna is portrayed as a girl child. This feminine divinity allows the poet to present his ‘enthralment’ in a romantic light.

Listen to the maestro sing below, while you peruse the lyrics and my interpretations which follow.

Note: I present the lyrics in Devanagari script as I do not know Urdu script.

O my (mErE) envy-of-the-moon (rashk=envy, qamar=moon i.e. so beautiful that the moon envies that person) when you (tu nE) met my eyes (nazar milana = to meet eyes, an idiom) for the first time (pahlI), how enjoyable was that! (mazA A gayA)! It was as if (sI) a lighting (barq sI) fell (gir gayI), and did what it was meant to do (kAm hI kar gayI), igniting (lagayI) such (aisI) a fire (Ag) that it was greatly enjoyable! (mazA A gayA)!

The poet talks of the ‘pahlI nazar‘ or the first meeting as being like a lightning strike alighting a burning passion. Love at first sight is not something I trust in, but I do understand the concept. Well, I did love my children from the moment they were put in my arms!  What then is a first meeting with the Divine? I have felt a certain something in some holy places, yes. And also when seeing some natural wonders. Do some people feel these things so strongly that they become passionately devoted from that moment on?

After mixing (ghOl kar) the intoxications (mastiyAṅ) of beauty (husn) in (mEṅ) my (implied) goblet (jAm), the moonlight (chAṅdnI) smiled (muskurA-I); how enjoyable was that (mazA A gayA)! In the (mEṅ) shelter (sAyE) of (kE) the moon (chAṅd), O (ai) my (mErE) cup-bearer (sAquiyA), you (tu nE) gave me drinks (pilAyI) in such a way (aisI) that it was greatly enjoyable (mazA A gayA)!

Intoxication is an analogy for being in a heightened state of divine love, an analogy often used in Sufi poetry. The beauty of divinity is mixed into the goblet which the poet imbibes. Who then is the sAquiyA or the cup-bearer? Perhaps it is the Guru or the teacher who initiates one into loving the Divine. I like the use of moonlight to set the scene – it is so much more gentler than sunlight, isn’t it? In moonlight, much is still in the dark, just as for us all, much about the Divine is unknown.

The poet talks about a dissolute gathering of intoxicated people. To the ritualistic devout, this passionate love will of course seem dissolute! As the love for the Divine took root and stretched, says the poet, the goblets started clinking. I think he means that a resonance is created, and devotees feed on each other’s fervour.  As that happened, it was as if more intoxication, more love, poured down upon him. It seems to me that the poet talks about reaching an ecstatic state.

It is in such an ecstatic state that the Divine becomes unveiled and clear to the seeker. The poet likens the meeting to one of youthful lovers. It is a mutual love, the poet clearly states, not a one-sided affair. I like that!

There was (thI) modesty (hayA) in her eyes (Aṅkh mEṅ) at (par) each (har) encounter (mulAqAt), and her cheeks (Ariz) reddened (surkh) at the talk of (bAt par) union (wasl). At my questions (mErE sawAlAt pE), she (us nE) bent (jhukAyI) her neck (gardan) in embarrassment (sharmA kE) in such a way (aisE) that it was greatly enjoyable (mazA A gayA)!

Portraying the Divine in a feminine form to the poet’s masculinity lends an interesting aspect to the poetry. Here the poet takes on the masculine pursuer’s role, while the Divine is the one pursued. I interpret this to mean that those who are seek the Divine need to actively pursue this, and not wait passively for it to happen. The poet seeks union, and the Divine shies away; the Divine is not easily ‘caught’.

The faith (ImAn) of the venerable gentleman (shaikh sAhib) was destroyed (miT hI gayA) and seeing (dEkh kar) the beauty of the cup-bearer (husn-E-sAqI), it just melted away (pighal hI gayA). How proud (mag̠rUr) he (yE) was before today (Aj sE)! Now his virtue (parsA-I) is lost (luT gayI), how enjoyable was that (mazA A gayA)!

Here I hesitate in my interpretation. Who is the venerable gentleman? Is it the poet himself? If that is right, he had been a traditional devotee before, with a strong faith and pride at his own virtue. A ‘ritualistic’ devotee perhaps? The transition from ritualistic belief to passionate belief must occur with a break-and-remake. All that you consider to be virtue – the rituals, the beliefs, the rules – have to be thrown away before you can embrace this new type of devotion.

O Death (fanA -also the pen name or takhallus of the poet)! My (implied) gratitude (shukr) that today (Aj), after my death (bAd-E-fanA), she has (us nE) kept (rakh lI) the honour (AbrU) of (kI) my love (pyAr). With her own hands (apnE hAthOṅ sE) she  (usnE) spread (chaDHAyI) a covering (chAdar) of flowers (gul) on my (mErI) grave (qabr) which was greatly enjoyable (mazA A gayA)!

Again I interpret the ‘death’ to be the death of the old prideful self. In Hindu philosophy I have read that the ego, this feeling of self, must be destroyed before one can find union with the Divine. Not that different, is it! Through it all, the Divine keeps honour with your love, the poet says. I have not so far commented on the refrain ‘mazA A gayA‘ which adds so much beauty to these lyrics! The poet has enjoyed every step of his transformation from his first introduction to Divinity, his intoxication, the pursuit of a union and the destruction of his old self. He implies that this is a joyful transformation indeed!