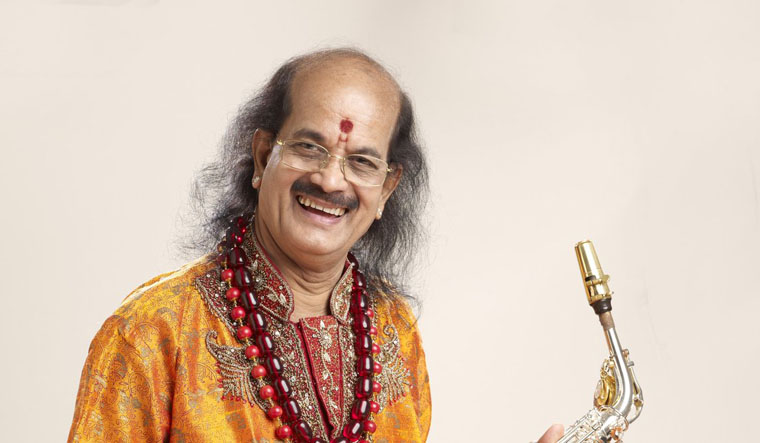 What a great loss we Carnatic Music lovers have had this past week! Kadri Gopalnath, the saxophonist par excellence, is no more. A man who bent his will over the saxophone such that it blew to his tune, a man who paved an untrodden path to show that the saxophone is an instrument of choice for Carnatic Music, a man of immense talent that we have all admired over many years, he is a man who will never be forgotten. I dedicate this post to this man and his music. May he play his sax in celestial spheres for evermore.

In selecting a song to honour Kadri Gopalnath, I have chosen a devi kriti. Navaratri has passed by without my having made a single post.  This is my first miss for Navaratri since I started this blog in 2011. I cannot believe that one year I had even managed nine kritis for the nine days of Navaratri! So very belatedly, I am presenting this beautiful song to honour Goddess Ambika. This song is particularly suitable as the poet-composer Harikesanallur Muthiah Bhagavatar describes the Goddess as being ornamented with beautiful ragas. A post to honour a musician who created beautiful music and a Goddess who is adorned with the same is a good match, don’t you think! I also felt that a raga which is called Amrutavarshini or ‘she who showers the ambrosia of immortality’  is a good choice to honour a man whose music will remain immortal. At times, when I have listened to his music, when notes follow cascading notes, I have felt bathed in the beauty of music. The man who made the music has passed as I too will one day, but I imagine those moments of beauty remaining suspended little gems floating in the atmosphere for eternity.

Out of nostalgia, I am presenting a rendition from an old recording of Kadri Gopalnath from 1985, a rendition which is so very familiar to me.

For a vocal version, I have chosen a recording from the same era. I have always had a great liking for Maharajapuram Santhanam who sings Sudhamayee with an effortless charm which I am sure you will appreciate.

O Goddess Vijambika who is praised (nuta) by Brahma (vidhi) and Indra, O Pure  One (vimalE)! O Goddess (implied) who is the essence (sArE) of the Vedas! Protect me (salahau – this word is in Kannada, not Sanskrit)!

O Lotus-eyed one (sarasija-Lotus, akshi-Eyes)!! O Goddess (implied) who fascinates (mohini) the whole world (jagat)! She who is decorated (bhUshaNI) by the gems (maNi) of beautiful (sarasa) ragas. The loving woman (kaminI) who is dear to (priya) Lord Shiva (harikEsha which is also the poet’s signature), She who showers (varshiNI) us (implied) with the ambrosia of immortal (amRuta) bliss (Ananda) [I’m unsure of the translation of the alternative version]

Note about translation : The lyrics were easy to translate except for the word Salahau. I looked up multiple dictionaries but could not find this word. Is it a typo, I wondered. Or perhaps a declension of some other word? Checking declension tables did not help. I searched for other uses of this word, but only MB seems to have used this word in his kritis. There was no trace of this word in kritis by any other composers. How odd, I thought! I have had a cataract operation only day before yesterday and am still struggling with my eyesight so all this computer work made me quite dizzy. I was almost giving it up after more than 2 hours of searches when I finally found a mention in an old article in Carnatica that this word is in Kannada and the Bhagavatar has often thrown in a few Kannada words into his Sanskrit compositions. Finally the mystery was resolved! All of you Kannada speakers are no doubt wondering at my ignorance!