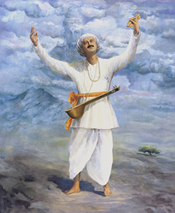 ‘I am an atheist’ my son tells me.

It is Deepavali day and we are at the temple. My son’s statement is not a surprise; I am aware of his thoughts. Yet..

Generally speaking, my tendency is to say ‘each to his own’. I feel very unqualified to judge people for the choices they make. Who is to know what is right? Yet in this case, it feels different. I see this as a my failure. As a mother, I should have made a better effort to teach him of a belief system which has given me much succour over my lifetime. I say as much to him.

‘Are you so sure of being right then? What if you are wrong?’ he asks.

I acknowledge that it is not really possible to prove the existence of God. At some stage, one has to take a leap of faith. Yet there is this feeling… I think it is like music appreciation. There is all this wonderful music, soul touching music, our world of Carnatic Music. Thousands pass by its path, unaware, untouched. Even amongst those who listen with great interest, only rarely does the music ‘speak’ in such a way that one’s soul merges with the music. The transmission may be there, but if one doesn’t have a receiver, one hears nothing! For music and for devotion, one needs a receiver within oneself, or so I think.

‘teliyalEru rama bhakti mArgamunu’ I tell myself as the title of the song comes to mind. I search for a translation to see that Tyagaraja speaks of something a bit different – not about the lack of faith, but about putting on a grand but false show of faith. Tyagaraja seems saddened.  ‘They can never know, O Rama, the true path of Bhakti’ he says. ‘They get up early, take a dip in water, smear themselves with ash, count their prayers on their fingers, but all a grand show for appearances’ says he. It seems far worse than a honestly stated atheism, doesn’t it? For full lyrics and translation, see footnote. The song is set to raga Dhenuka; to know more about this raga, click here.

I have been in the mood of yesteryear greats as last week’s post demonstrates. I have listened to many renditions these past few  days but keep going back to the one by Semmangudi Srinivasa Iyer which I present below. Sound quality is not very good but the music is exceptional.

For an instrumental version, here is a elaborated rendition of this song. I found it very interesting as elaborations of this raga are rare. Again sound quality is below par but definitely worthy of your attention.

I do not speak Telugu. I am indebted to various internet resources for the lyrics and translation below.

(note: k and g seemed to be used interchangeably in most sites I referenced)

People do not have the knowledge, O Rama, of the path of devotion.

People wander all over the earth babbling, but (they do not have the knowledge….)

People get up early, take a dip in the water, smear sacred ash, count the prayer beads (implied) with their fingers, outwardly being praiseworthy. Inwardly (implied) they are dedicated to earning money. But, O Lord praised by Tyagaraja, (they do not have the knowledge of the path of devotion).