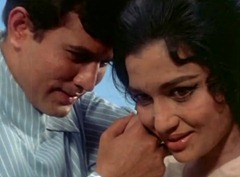 Seeing my ironing pile increase to an Everest-like magnificence, I decided to get down to some movie-watching. What’s the connection you ask? Well, I can’t iron without entertainment! I checked my list of to-see films and chose Kati Patang.  Though I know the music intimately, I have never seen this film before.

A young-woman, Madhu (Asha Parekh), runs away to her beloved on the day of her arranged marriage to a man unseen (which era is this?!!). Her beloved does not deserve the title, for he is a cad, only after her money. She is shocked (but why? this is Prem Chopra, what can she expect?) only to find her uncle and guardian is dead. She leaves then (no funeral?), running to nowhere, when she meets a widowed friend travelling with her small child to meet her in-laws for the first time. The train crashes and her friend dies, demanding a death-bed promise that Madhu pretend to be her (but why?) and go to her in-laws with her baby. The taxi she catches turns out to have a dastardly driver and she is rescued by Kamal (Rajesh Khanna) who happens to be the groom she has run away from!

Do the coincidences befuddle your brain as much as they do mine?

Kamal and Madhu fall in love, but she is a pretending to be a widow and re-marriage is not easily accepted in society. Kailash the Cad (Prem Chopra) is alerted by his girl-friend Shabnam (Bindu) and comes to blackmail Madhu. She tries to resist but it is not easy. In the meanwhile, Madhu writes to Kamal confessing her story but the letter falls in the hands of her father-in-law Dinanath (Nasir Hussain). He is angry at first but then he accepts her and even talks to Kamal’s father, arranging Madhu’s marriage with Kamal.

Tragedy strikes when Kailash the Cad poisons Dinanath the FIL and Madhu is taken into custody by the police. Will her innocence be proven? Do Kamal and Madhu have a future together? Well, you’ll have to watch the film to find out!

I do hate it when script-writers pretend to give a social message but are in fact manipulating the audience. Is this film meant to encourage widow re-marriage in traditional families? But then Madhu is not really a widow, is she? Blast, I am not supposed to see through their ruse, am I? There were other instances of audience manipulation which I found distasteful but I admit, I am just being picky. This is Bollywood, its par for the course.

Rajesh Khanna proves why he was such a success. He has this certain intensity….hmmm, I am a woman after all, you must forgive me if I fall for a man’s charm now and then!  Asha is not my favourite but she does a reasonable job. Prem Chopra is as slimy as a badly cooked okra and Bindu is Ooooomph incorporated, especially in her next-to-nothing costume for her dance sequence. I imagine she caused a sensation in those more innocent times!  Overall, the film is watchable especially given the lovely songs.

The music by R.D.Burman is the highlight of this film and Anand Bakshi has done a superb job of the lyrics.

My choice for today is Mukesh’s song. This in no way denies my worship of Kishore’s voice!