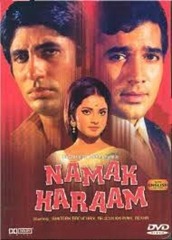 Once upon a time, a Phenomenon called Rajesh Khanna ruled in India. He was a true romantic and wooed the world with his twinkling eyes and charming smile. All that he touched became gold. He had it all – name, fame and a young Dimpled Queen. Into his kingdom came a dark and morose man. Who knew then that he would be the new King; in fact that he would set up his own Dynasty? But we should have known…yes..there was this unleashed power, a violence, within him…and it was in Namak Haraam that we had the first inkling of this.

As I re-watch the film today, I am surprised that this was the role which was the turning point for Amitabh. I didn’t find his role particularly appealing; it was rather one-dimensional and contradictory. Take, for example, how he looks down on his household staff and the workers at the factory. Would a man like that have a friend who is so middle-class? How can he miss the fact that his manipulations to make Rajesh popular make him look weak and ineffectual? Shamed by apologising to Hangal, why did he accept losing face to Rajesh publically? I see holes in Gulzar’s development of Amitabh’s character. But Amitabh does a good job of his material, especially towards the end.

Rajesh definitely has the better role. You can see how the character grows and changes over time and Rajesh is very convincing in his role. I was sold on him, cynical as I am. The ladies, Rekha and Simi, appear decorative but have very little to do. Other supporting actors like Hangal, Asrani, Om Shivpuri and Raza Murad have small roles but impress nonetheless.

One mustn’t forget the part played by Alcohol !  It is ever present as the young men bond over their shenanigans, its over alcohol (and bhang!) that Rajesh bonds with his new friends, Rajesh’s ‘conversion’ is complete when he realises that one peg of Amitabh’s whisky costs more than a month’s wages of his other friends and its over alcohol that the friends have their final confrontation. Ah, the power of nasha !

But I was drawn to the film by the memory of one particular song and it doesn’t disappoint. The rest of the album is average and Anand Bakshi’s lyrics are adequate.

You can listen to the whole album here. But for my post today, I have no choice really;  it has to be Main Shair Badnaam!