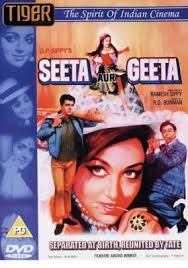 ‘I need something to cheer myself up’, I think as an excellent but sad English  film I saw on TV keeps lingering in my mind. Cheering up film? I immediately think of Seeta aur Geeta which I haven’t seen since the seventies. But it left a happy impression on my mind then so I am hopeful about it. Though the music is no classic, I remember a couple of cheerful numbers. The presence of a very handsome Dharmendra and an endearing Sanjeev Kumar is a definite draw!

The film is as much fun as I remembered. A light-hearted plot, you shouldn’t look for too much logic in it otherwise you’ll just get frustrated. Take it as it comes and you’ll get a couple of hours of amusement. Some off-the-cuff observations :

The music I found to be just average, but perhaps its unfair to expect R.D.Burman to deliver each time.  Or is it? However, thanks to Asha, Lata, Kishore and Manna being in great voice, even ordinary compositions provide easy listening pleasure. In short, an album for good time-pass, but no more.

To remind all of you in my generation of our carefree years, here is O Saathi Chal with Hema looking beautiful and Sanjeev charming as ever.