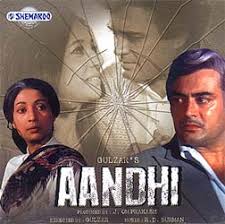 I admit, I tend to have very critical eyes when I watch films. It is rather sad because very often I am distracted by what doesn’t work – the plot, the dialogue, the chemistry, the music or even the leading lady’s hairstyle – and end up not enjoying even the enjoyable bits.

Very very rarely there comes a film where I have next to no complaints. Maybe I am so mesmerized by the good parts that my mind glosses over everything else. Maybe there are no bad bits. No matter. This week I re-watched Aandhi after many many years and amazingly, I had only one complaint, that too a minor one! This, dear readers, is a very good film and I shan’t hesitate to recommend it.

The script is tightly written and Gulzar directs his own screenplay in his inimitable style. The lead characters are interesting, not black-and-white as in many Bollywood films but painted intriguingly in shades of grey. Wikipedia tells me that the story is inspired by the life of Tarkeshwari Sinha and not Indira Gandhi as I had supposed. The leading pair, Suchitra Sen and Sanjeev Kumar, are SUPERB. The supporting cast including Hangal as the old retainer, Om Prakash as the weasel of a  political agent, Om Shivpuri as the opposition leader, Rehman as Suchitra’s dad, all of them give fine performances. And the ending leaves enough threads hanging to make it interesting.

And ah, the music. Aah! R.D.Burman’s compositions shine like stars. I can wax lyrical about the lyrics by Gulzar. The playback singers sing like angels. I see no shortcomings. None. These are the songs:

As you can see I give all songs the top score! This is one good album. You can listen to the whole album here. I have chosen to present the song where the lead pair have happy smiles in this rather serious film. Enjoy!