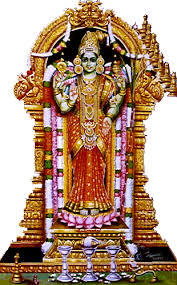 ‘Amma, Thayé, Akhilandeshwari’ – I take the name of Goddess Akhilandeshwari quite often, without thinking, as an interjection, as a groan, as a laughing complaint.  Thankfully there is no interdiction against us Hindus taking any of our God or Goddesses’ names in vain; on the contrary, I believe we are quite encouraged to do so.

I have never been to the temple of Goddess Akhilandeshwari which is near Srirangam. My father came from this town and in my childhood I remember paying visits to my grandparents’ house which was in the agraharam (the immediate surrounding lanes) of the famous Ranganathar Swami temple, in deep Iyengar territory. Coming from a Vaishnava family, I was never taken to the Akhilandeshwari temple. My father’s favourite interjection was ‘Narayana!!’. So where did I get this habit of invoking Akhilandeshwari instead? I don’t really know, but the good lady has been present in my vocabulary for a long time indeed.

So today, to honour Her and thank Her, I present a song which I love dearly. Written by Muthuswami Dikshithar (1775-1835) in praise of this Goddess, the composition is in Raga Dwijavanti. To know more about this raga, click here. See footnote for lyrics in Sanskrit; click here for transliteration and meaning. It is sung below by Bombay S. Jayashri, she of the mellifluous voice.

Jayashri’s guru is Lalgudi Jayaraman and I clearly see his influence in the way she sings this song. Listen to his version played on the violin below. What a master he is of his instrument !!!

I have not heard very many detailed renditions of Dwijavanthi. If the raga pleases you, here is a Ragam-Tanam-Pallavi by T.V.Shankaranayanan to listen to.

O Akhiladeshwari, you who are skilled (nipuNa) in the traditional doctrines (sampradAya) Agamas, protect me (raksha mAm)

The entire (nikhila) world (lOka) is eternally (nitya) based on you (AtmikE).  You are impeccable (vimalE), unsullied (nirmalE).  You are dark coloured (shyAmalE) and are the embodiment (implied) of all arts (sakala kalE).

You are worshipped by (pUjitE) by Ganesha (lambOdara) and Murugan (guruguha). You are respendent with (udbhAsitE) with pendulous curls (lambAlaka). You have a smiling face (hasitE). You are worshipped by (ArAdhitE) by Saraswati (vAgdevatA). You are a bestower of boons (varadE). You are praised by (nuta) the king (rAja) of the supreme mountain (vara shaila) (this may be referring to Parvati being the daughter of King Himavan). You are Sharada (unsure of this, surely Sharada is the name of Saraswati?)

Adhered to (sambhAvitE) by Lord Indra (jambhAri – also means thunderbolt, which is a weapon of Durga), you are praised by (nutE) by Vishnu (janArdana), you are praised in Raga Jujavanti, You rejoice in (muditE) the sounds of (nAda) musical instruments (vAdya) like a jhalli (dictionary says jhallaki) , maddala and jharjhara (they are all drums, what is the significance of that?). You are the provider of (pradE) of knowledge (jnAna).