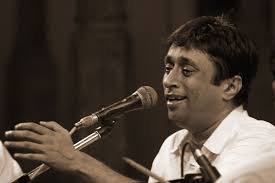 When I saw the flyer from the Geneva Indian Association that there was to be a Sanjay Subrahmanyan concert, I was thrilled. In Melbourne, I used to get to hear live concerts of top-level Carnatic Music exponents a few times each year. Since moving to Switzerland eight years ago, I have been to only one concert – and we drove 250 kms each way to see it! Any live Carnatic Music would have gotten me excited, and this was Sanjay whose music I listen to at least a few times each week !!

Thanks to my dear husband who likes to be not just early, but you-can’t-be-serious kind of early, we reached Geneva a good hour and a half before the concert. The organisers were just getting themselves organised and I introduced myself to the lady with whom I had made contact for tickets. Before long, my husband and I were helping them set up the stage. The artists arrived soon and I had the privilege of listening to the warm-up by Sanjay, the violinist S.Varadarajan and the mridangam artist Neyveli Venkatesh. Sanjay sang the varnam Chalame in Nataikurinji to test the sounds; what a sound he has !! My concert started there.

The concert then followed along these lines:

I luckily found an an audio of Sanjay singing Tunbam Nergayil in Raga Desh (see footnote), so I present this for your listening pleasure.  The song is written by Bharatidasan and according to internet sources, set to music by Dandapani Desikar for the movie Or Iravu (1951).

Long after the concert finished, the sounds kept reverberating inside me. Sanjay’s voice embodies all that is masculine in Carnatic Music singing; it comes from the nabhi, from deep inside his body, with astonishing strength. In the lower ranges especially, it sounds magnificent. A man blessed by Goddess Saraswati.