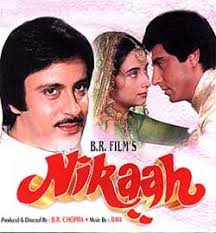 I remember Nikaah (Marriage) very well; I too was married in the same year!  The popular genre of Muslim social dramas had been very popular in the 50s and 60s but hadn’t been made for some time when this film was released so it created quite an interest. It was also often in the news because it starred a Pakistani actress who sang for herself. All these memories flit through my mind as I pick this album today with lots of nostalgic pleasure.

As I hear the music, I am charmed anew. I so love the music of yesteryears where attention was given to the lyrics and melody rather than orchestration as is popular today. I love many of music director Ravi’s albums. The thing that grabs me today are the lyrics by Hasan Kamaal.  How well he expresses the emotions of a woman hurt in the past and afraid to take a risk again –

All the competitive verses of the Qawwali Chehra chupa liya hai with the man vs woman perspectives are so very cleverly written !

The second thing which catches my attention is the unusual combination of Salma Agha’s nasal and rather plaintive voice with the deep and well modulated voice of Mahendra Kapoor. A very pleasant combination.

So here are the songs, with my recommendations :

To listen to the whole album, here’s a link. For this post, I wanted to present the Qawwali Chehra Chupa Liya hai – I so love qawwalis! Unfortunately I couldn’t find a good video online. Ghulam Ali’s song is his own, so not a credit to the music director or the lyricist.  So I offer for your viewing pleasure Dil Ki Yeh Arzoo..enjoy!