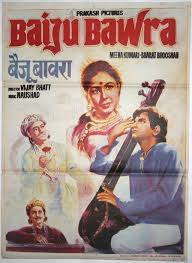 Since I started this blog, I keep drifting again and again towards the music my mother loved. I feel her presence in this music, as I do in so many other areas of my life; the music feels even more dear now that she is gone.

As with much of the music from old films, I was familiar with the music in my childhood before I saw the film. My memory from a viewing on television during my teenage years is unclear; but as an aid to writing this, I saw the film again a few days back. It seems to me that the cast has done an excellent job though the film could have been better edited. But the music, oh the music!! I was awash with tears with the beauty of the music.

The story is that of a classical musician from Chanderi, Baijnath Prasad or Baijnath Mishra (1542-1613) called Baiju Bawra (the crazy). However the film bears only vague resemblance to the account of his life as published in Chanderi’s website. Like Tansen, he was the disciple of Swami Haridas (1512-1607). There is no mention in this film of his connection with the court of Gwalior, which seems to be an important one in real life.

The music of this film about a musician needed to be brilliant, and there it delivers, absolutely. Naushad (1919-2006) won his only (!!!! how’s that possible?) Filmfare award for his music. But he did win the well deserved Padma Bhushan in 1992 many years later. The Filmfare awards being newly instituted, there seems to have been no awards for singers. If there had been awards, Mohammed Rafi would no doubt have swept them all. Shakeel Badayuni, the lyricist, does a memorable job as well.

I list the tracks with my reactions to them :

With four brilliant songs, I am in a quandary. Presenting just one is impossible, so I shall  feature one of Rafi’s and one of Lata’s. For those who want to listen to all the songs, here’s a link to Musicindiaonine.