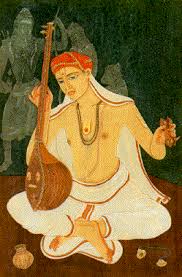 The Pancharatna Kritis are five compositions by the great Saint composer Tyagaraja (also spelt as Thyagaraja). They are arguably the most well known kritis (compositions) in Carnatic Music. The kritis are really prayer songs, written in praise of Rama. I shall present these five kritis as sung or played by different musicians over the next so many posts.

Jagadanandakara is the first composition and is written in raga Natta (to know a more about this raga, click here). This is composed in Sanskrit while the other Pancharatna Kritis are in Telugu.

Every year in January, a music festival is held in Thiruvaiyaru to commemorate the saint. Carnatic musicians converge here and one of the highlights is the group performance of the Pancharatna Kritis by hundreds of people, including some very famous musicians.  Musically one can hear better renderings of the kritis, but the atmosphere cannot be beaten. Watch below the kriti Jagadanandakaraka as sung in the festival.

Listen to this version on the Veena, one of the oldest Indian Musical Instruments known even in Vedic times (1500 BC and before). The artist on the Veena is E.Gayathri and it is from the album Pancharatna Kritis of Sri Thyagaraja.

This site has the wordings and translation for those interested.