A Song for Jaya’s Simplicity 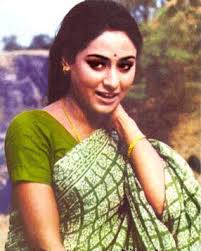 I confess. The moment I think of Jaya Bachchan (Badhuri), I know exactly which song I want to feature in this blog! Still, I sift through the considerably impressive list of her movies and remember them with great pleasure.

It strikes me now that I have a very strong sense of identification with Jaya. I was a young school girl in plaits when I saw her as a school girl in Guddi (1971). I loved ‘Bole re Papihara’ which my sister used to sing so beautifully. My mother loved ‘Main ek raja hoon’ from Uphaar (1971); I can clearly remember her singing the song in a strong Tamil accent as she pottered in the kitchen.  But in these movies Jaya was yet to mature to her full skills as an actress. Jaya grew up just ahead of me, it seems to me, and as I matured in life, so did she in her films.  When she did her matronly and motherly roles, I played the same role in real life.

As I sift through her movies, I am amazed at how many excellent movies she has starred in within a short span of time. Did she ever sleep? Overall she leaves us with an impression of simplicity and strength.  In Silsila (1981), the song ‘Sar Se Sarke Chunariya’ is a serious contender and as I watch it now, I am impressed by her ability to emote with every fibre of her being. It also strikes me that Shashi Kapoor was indeed nice eye-candy material! However, I never found any dance numbers, not something in her core-competency I think. The song-and-dance numbers being integral to the success of an Indian film, her achievements without being able to dance well is a testimony to her acting skills.

And so I come to the all time favourite songs I had selected as soon as I thought of Jaya, featured in a brilliant movie in which she gave an outstanding performance.  Now, does that sound like too many superlatives in one sentence? I say no, not for this movie.

In the clip above, Amitabh impresses me even more than Jaya. But that is for another day. Nobody who has seen the movie could go without mentioning the other equally brilliant song, ‘Tere Mere Milan’ sung by Lata Mangeshkar and Kishore Kumar. On hearing it now, I fall in love once more with Kishore Kumar’s voice, which I think is simply peerless.

For those who have not seen the film, I strongly recommend it. You can watch it here. Enjoy!

4 responses to “A Song for Jaya’s Simplicity”