I admit it. Indian Mythological films are often made for the lowest common denominator. Their special effects aren’t in the least special. There is a fair bit of melodrama. I watched the excruciatingly slow-moving Ramanand Sagar’s Ramayan and though I looked askance at the amateurish way many things were represented, I never thought of giving up.  And recently, when I was sick in bed, I turned to a number of my childhood favourites in Tamil. I cannot be critical of them, even though in certain bits they deserved criticism. When I watch them, I am transported once more in childish delight. So what draws me (and others with the same affliction)? Is it the familiarity of stories learnt from childhood? Is it just our ‘Harry Potter’ – a world of magical powers? Is it a form of piety? No answers…

So to celebrate the power of Mythological films, I present the following song from one of the best in this genre, a beloved & iconic film for Tamil viewers: 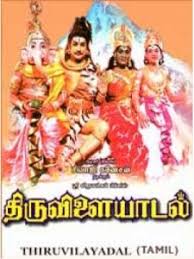 Sivaji Ganesan’s performance in this song makes me understand exactly why he was so well admired.

Below is the equally beloved other song from the same film, sung superbly by Carnatic music stalwart Dr. Balamuralikrishna :

If you want to watch this old Tamil favourite, you can do so here.

6 responses to “Music in Mythological Films”